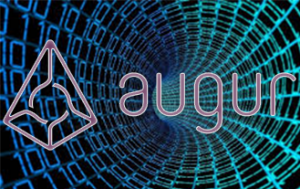 Watching the evolution of cryptocurrencies and the development potential of blockchain projects is one of the most captivating activities one can engage in. Ever since Bitcoin’s white paper, the world of cryptocurrencies has mutated from a tool to side-step middlemen, make P2P transactions widely available and enhancing their speed, into a world which seeks to emulate, improve and even replace traditional financial systems altogether. Ethereum-powered Augur falls clearly in the middle of the spectrum, right between emulating existing financial systems – or tools – and improving them.

Augur effectively resembles a widely used financial instrument, the CFD – contract for difference – in a decentralized manner. It does so by allowing users to create a market from the outcome of any event, which is effectively regulated by a crowd of users and secured through the Ethereum blockchain. Augur therefore allows investors to:

Augur Innovates by Emulating and Improving

A decentralized prediction market on the Ethereum blockchain is really an adaptation of something that already exists, with the benefits that blockchain powered decentralization provides. It is a promising project, nonetheless one that will raise a few eyebrows amongst purists and a few interesting questions for some of the experts it seeks to replace.

Augur has itself been involved in what looks like the classic pumping and dumping schemes that are dominated by expert speculators in the traditional financial system. This chart shows the wild roller coaster ride it took over the last few days. Screen shot from coinmarketcap.com

Bitcoin and blockchain technology gained a lot of traction partly because of the state of affairs in the world at the time of introduction. With the 2007-09 economic debacle, the international financial system came under scrutiny for its recklessness; regulators and experts were widely disredited for failing to do their job. Some were even accused of manipulating the markets. Hence the whole idea of developing decentralized financial tools and markets, as well as generating trustless systems, became a desirable alternative.

Is Augur a Decentralized Speculation Market?

But some may argue that some of the most recent blockchain projects are actually bringing new tools to the old order. Augur might fit that description. To bet on an outcome, generates some of the very same pitfalls that the traditional financial system created, or does it?

Perhaps along that spectrum between emulating and improving, the improvements actually take away most of the shortcomings embedded in the traditional financial system. Nevertheless, it is still speculation. The difference is that this time around, when speculators are right they will be rewarded with the guarantee that no one can manipulate the information to prevent them from reaping the benefits of whatever they augured.

Above all, blockchain and cryptocurrency projects exist to create tools and services that the market demands. So far it seems that the demand for speculation is still high. Cryptocurrency markets themselves have enabled speculation in a different playing field. Investors have engaged in numerous pump and dump schemes involving Ethereum-powered projects and other cryptocurrencies, so if Augur can funnel speculation towards a trustless decentralized system, it will at least be able to price uncertainty more appropriately.

So what does the Future Augur?

After suffering from a recent bout of volatility itself – some may say it was sparked by uncertainty and speculation – Augur will attempt to convince speculators to at least carry their market activities out within a system that can price in the risk of speculation as accurately as possible. So far Augur has displayed a lot of market volatility, dropping from a high of $18.04 USD to a low of $6.39 USD in just five days. That might be the result of recent excitement about its launch coupled with a subsequent reality check about the project’s scope, as much as it could be the result of sheer speculation with an asset that is supposed to be used as a tool to properly price in the risk of such speculation. It will be certainly interesting to see where this project is going a few months down the road.

Potential Augur Question: Just to gain more clarity about an issue, and highlight how Augur can generate value, could we ask the market to price in the probability of Ether climbing back above $18 USD sometime in the future? Perhaps some of us would also be interested in getting the crowd’s take on when all the hacking attempts on Ethereum will stop, or is that too much of an open question for Augur’s smart contracts to handle?