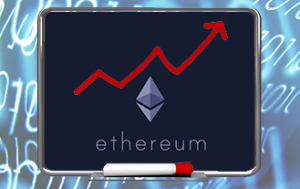 Ether prices have been soaring lately. In fact, the cryptocurrency is racing towards pre-DAO highs. Many would find this hard to believe after the hard fork that followed that attack left many unanswered questions. Nevertheless, Ethereum has been moving forward ever since. The network successfully catered to corporate giants that are interested in using it to take their services into the blockchain era. Ethereum developers have also found a way to wane the network off mining and switch it to a Proof-of-Stake network. Both developments have had an impact on the price of Ether, each from a different direction.

Corporate backing from the Enterprise Ethereum Alliance – EEA – has certainly buoyed Ether prices. Any project that boasts support from fortune 500 companies such as Microsoft, Intel, Accenture, JP Morgan and Credit Suisse among other, will immediately see an impact on its valuation. Backing from a group of companies such as this one will immediately bolster a project’s credibility. From its side, the EEA is reaping the benefits of being able to experiment with blockchain technology and smart contracts at a relatively low price.

No one will be able to Mine Ether

On the other side of the equation, the very digital resource that these companies and every other Ethereum user will need to launch its experiments or projects, is about to become scarcer. Ethereum will effectively move from a Proof-of-Work – PoW – mechanism to a Proof-of-Stake – PoS – mechanism shortly. This will effectively end Ether mining, turning to a pioneering system in which transaction authentication is done through “bets” on transaction consensus from full nodes. Those nodes will be rewarded for their “bets” with transaction fees.

Will this PoS Mechanism cap the amount of Ether?

Lack of mining does not mean that the amount of Ether will be capped. Instead, the Ethereum network has provisions to reward Ether holder with a 2% “interest” on the amount they hold on a yearly basis. This effectively makes Ether an inflationary cryptocurrency for which there will not be complete scarcity; it will just be relatively scarcer than it is now.

It is all about Economics

The reason why we are seeing a sharp Ether appreciation is due to basic economics. The EEA signals to the market that there will be more credible users with a lot of financial muscle behind them pouring into the project. That effects the demand side. On the other hand, supply growth will shrink to about 2% per year. More demand on a supply side that will grow at a slower pace is a magical formula for price increase, no matter how many questions from the reaction to the DAO attack remain unanswered.