2016 Was A Roller Coaster For Ethereum 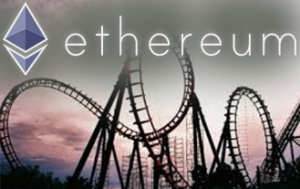 This past year was supposed to be a very promising one for Ethereum. Although many of the early adopters and investors can still claim amazing returns on Ether, the network itself suffered many blows. Probably the most incredible development of 2016, and one of the greatest reasons why Ethereum’s market cap is way below record highs, was the network’s split and the emergence of Classic. There is no doubt that 2017 may be an even more challenging year for Ethereum, mainly because a very close substitute is – contrary to predictions – still relevant.

Ethereum Hype Peaks and the DAO Bursts the Bubble

The origin of the split is between Ethereum and Classic is well known. After the DAO attack, a minority of the network disagreed with the hard fork because they saw that intervention as an assault on the basic ideological principles of a blockchain. Arvicco, the leader behind Classic even came out saying that a blockchain that does not stick to basic principles of decentralization and immutability, is nothing more than a glorified data base. This is how the DAO burst Ethereum’s bubble, and the Cinderella story quickly took some ugly turns.

The Ethereum Experiment and Classic

Nevertheless, there is a lot of value in what Ethereum has accomplished. It proved a concept that has the potential to change our lives fundamentally, especially when coupled with IOT. Ironically, the proof of Ethereum’s success, beyond the fact that it is still the second biggest blockchain network by market cap, is precisely the survival and growth of Classic. Many thought that Classic would disappear quickly. Instead it started narrowing the gap with Ethereum a few weeks ago, surpassing the $100 USD market cap a few days ago. As much as there might be disagreements between the members of both communities, the Ethereum experiment showed that the concept is so valuable that there is enough space for 2 competing blockchains.

This one year Ether-USD chart shows the story of Ethereum’s 2016 roller coaster. Early investors and adopters are still profiting, but Ether is way off its all-time highs. Chart from coinmarketcap.com.

As far as the hopes for Ethereum in 2017, it is safe to say that people are no longer blinded by the image of the ideal blockchain project. Ethereum’s flaws have been uncovered, and now it is time to fix them. The project still has a lot of potential and could turn its fate around next year. 2017 is full of challenges for Ethereum, but at least the roller coaster it went through this year, seems to have come to an end.