Santander Doubles Up On Ethereum With Small Payments Initiative 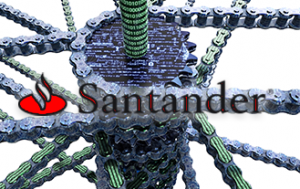 Santander is investing in and actively developing a myriad of blockchain projects. It seems that its goal is to become one of the most dominant banks in the world of blockchain, effectively putting it at the pinnacle of FinTech. The bank not only sponsored the DevCon 2 conference in Shanghai, but also developed a close partnership with Ether Camp. Through this partnership, Santander seeks to enable a quicker settlement of small cash payments using Ethereum.

The idea of the project is pretty simple. It stems from the fact that it takes banks long periods of time – sometimes even more than one day – to settle payments. This means that if banks could somehow make fiat currency digital through a proxy like Ether, they would be able to settle payments quicker using Ethereum blockchain transactions. Of course, this idea is still in its infancy, but it seems not only plausible but logical insofar as cost cutting goes. Santander’s customers would also be able to benefit from a better service.

Regulators are the Biggest Obstacle

The problem with this Ethereum-powered system of payments that Santander wants to develop, is financial regulation. If the bank gets approval from regulators in one country, that doesn’t necessarily mean that it will get approval in other countries. Therefore its best shot might be to push for suitable regulation within the EU. The MiFID regulatory framework might allow for Santander to push for EU-wide regulation, under the provision that if the authorities one of the members of the EU issues regulatory norms, those same norms would be automatically acceptable to any other financial regulatory body elsewhere within the EU.

The Irony in the Santander-Ethereum Partnership

Despite the fact that this kind of regulatory work could take years, the very fact that a public blockchain could be used by a bank to cut costs and better serve its customers, is in itself quite ironic. Blockchain technology, which came along with the advent of bitcoin, was intended to take the middleman out of the transaction and help users join a true, P2P economy. With banks moving fast to develop blockchain solutions of their own and with more and more corporate actors looking to take advantage of Ethereum’s infrastructure, that game has changed. The technology is effectively being used by corporations to save themselves from the threat that this very technology poses.

A Swift Stroke of Harmony

Despite the irony, it is necessary to understand that the world of blockchain and the Ethereum project is very dynamic. These technologies and developments are constantly changing and building upon the increasing flow of ideas that they enable. This means that Santander could well pass some of the cost cutting on to its clients, which would be an added benefit and would be more in line with the original idea behind blockchain. Nevertheless, everyone must keep in mind that P2P competitors might have an advantage over Santander, because they do not need regulation to operate. This is part of the reason why bitcoin payments are still relevant today, despite the widespread adoption of blockchain technology by big financial institutions. Ethereum can also be used as a P2P method to transfer funds, and this gives the purists enough time and flexibility to challenge Santander’s initiative, and force the bank to lower its fees once it implements this project.